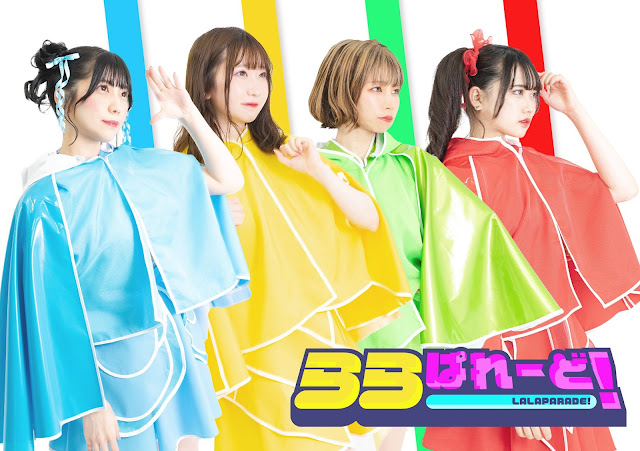 Courtesy: Official Twitter When you think of a parade, what comes to mind? Is it exciting? Vibrant? Fun? If you combined all three into an idol group, it would make a statement.  Right? Well, there is a group out there that fits these perceptions to a T.  Let's go see the LALAPARADE! It begins shortly. Will you join me on Main Street? Group Information LALAPARADE！ (ららぱれーど！）or LALAPA (ららぱ for short), is a group that debuted on July 23rd, 2021 with a live at Yokohama Minatomirai Broth (横浜みなとみらいBronth).  They are currently under the agency, アパートメメントモリ (Apartment Memento Mori LLC.) ららぱれーど！consists of four members with a wide array of fun personalities. As of now, they have released two digital albums. According to their official website and Twitter account, the meaning behind the name is simple. It combines LALA from LALAPALOOZA. which has the meaning of rumbling and astounding, and PARADE, a word that means march or procession. The group will shake the world with their bright and fun
Post a Comment
Read more Have you ever wondered what it would be inside a storm full of fun and energy? If you answered yes, this is the group for you. You won't be able to contain yourself. That group is BAKUMON! Will you join me on this journey into a party jetstream? Group Introduction BAKUMON is a group with the average age of 18 years old.  According to the official website, I'm going to paraphrase, when you hear the groups' rhythmic music, it creates a whirlwind of excitement that will make your body move without thinking.  They were unveiled on July 23rd, 2020.  The group belongs to both CMajor Works and FreeK-Laboratory. Both of those agencies have a variety of talent under their name. The group originally debuted with six members but shortly after quickly grew to eight. A few members have come and gone in recent months but now the group will be going strong with 10 members. They have released six digital singles and also a physical single paired with their agencies main single. I will refe
Post a Comment
Read more

Photo Courtesy: Official Twitter The usage of impressionism in music (according to Wikipedia) dates back to the late 19th and early 20th Century and is a movement that conveys moods and emotions of the subject, rather than details.  To be honest, I have never really listened to this kind of genre until a couple of years ago, thanks to this group.  Idols usually sing happy melodies or angry rock, but what about some real feelings that you might relate to in one way or another?  If you want to listen to some true emotion, this group is for you. Let me introduce you to aLive to Rainy (アライブとレイニー).  Group Information aLive to Rainy (アライブとレイニー) is currently under aLive Enterprise.  Their concept is that they are an orthodox impressionist idol group. It's an interesting concept for an idol group. The group debuted with six members. As of this post, there are currently three members of the group, with their own individual personalities and talents. The group was formed in March 2017 but di
Post a Comment
Read more
More posts