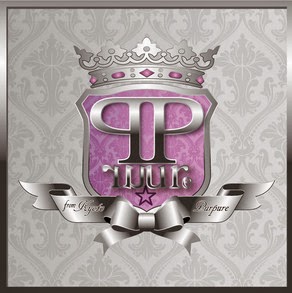 Let me introduce you to this great idol group.

The groups name is Purpure☆ as suggested by the title. Created in 2013, this group is from Kyoto, and aims for academic priorities on the weekdays and idle weekends for singing to deepen their ancient traditions and charm to make a knowledge of the history, culture and tourism as the idol of the city of Kyoto. All members had to pass the Kyoto Certification Exam. The groups' name comes from the old English coat of arms violet (Purpure) and the  ☆ meaning sparkling light, called the star. So in together it would make the group Purpure sparkly star.

The group consists of nine members according to their official website profile.

To this date Purpure☆ has only released one single. The single is titled Ka-Ren-Ka/Start. The single was released on May 5th, 2014. I hope to see more singles coming out and a potential album.

There are four tracks on the single; two with vocals and two without.

The first track Ka-Ren-Ka, I would consider it to be a ballad because of the tone it sets, the vocals are calm making it sound like a old-fashioned Japanese love song.

The second track, titled Start, I believe is to be the best song on this single. it has the rock feel you can jam to and it is very catchy. They did a very good job with this one. I get goosebumps listening to it (no, seriously).

How Did You Find Purpure☆?

Well, technically they found me. Since I have a Twitter account, I noticed one day about a month ago that the member Sae Watanabe decided to follow me. I had never heard of this group even while doing research of other groups.

I don't know how she found me, but if you see this, Thanks!

I went on YouTube and watched their live concert video for their song Start and I dug into them more.

After finding their official site and gaining knowledge of the group and its members, I knew I had been given a hidden gem.

After checking out their site, I decided to order their only single and a t-shirt. I might have went overboard and asked them to sign it.

I received the package about 10 days later with the cd and the shirt both autographed by the members of the group. I was astonished.

I greatly appreciate what you did and I will cherish it!

They have become one of my hidden idols that I hope I can spread the joy and fun of Purpure☆ with my readers.

They have not produced a MV but they have concert footage though and here it is. Both of their songs were performed at the Kyoto Okazaki Red Carpet.


The song is Start.

This next one is the main track for their first single Ka-Ren-Ka.

Also, here is their PR video they did. Just warning you, the pirate lady is kind of creepy to me. LOL. 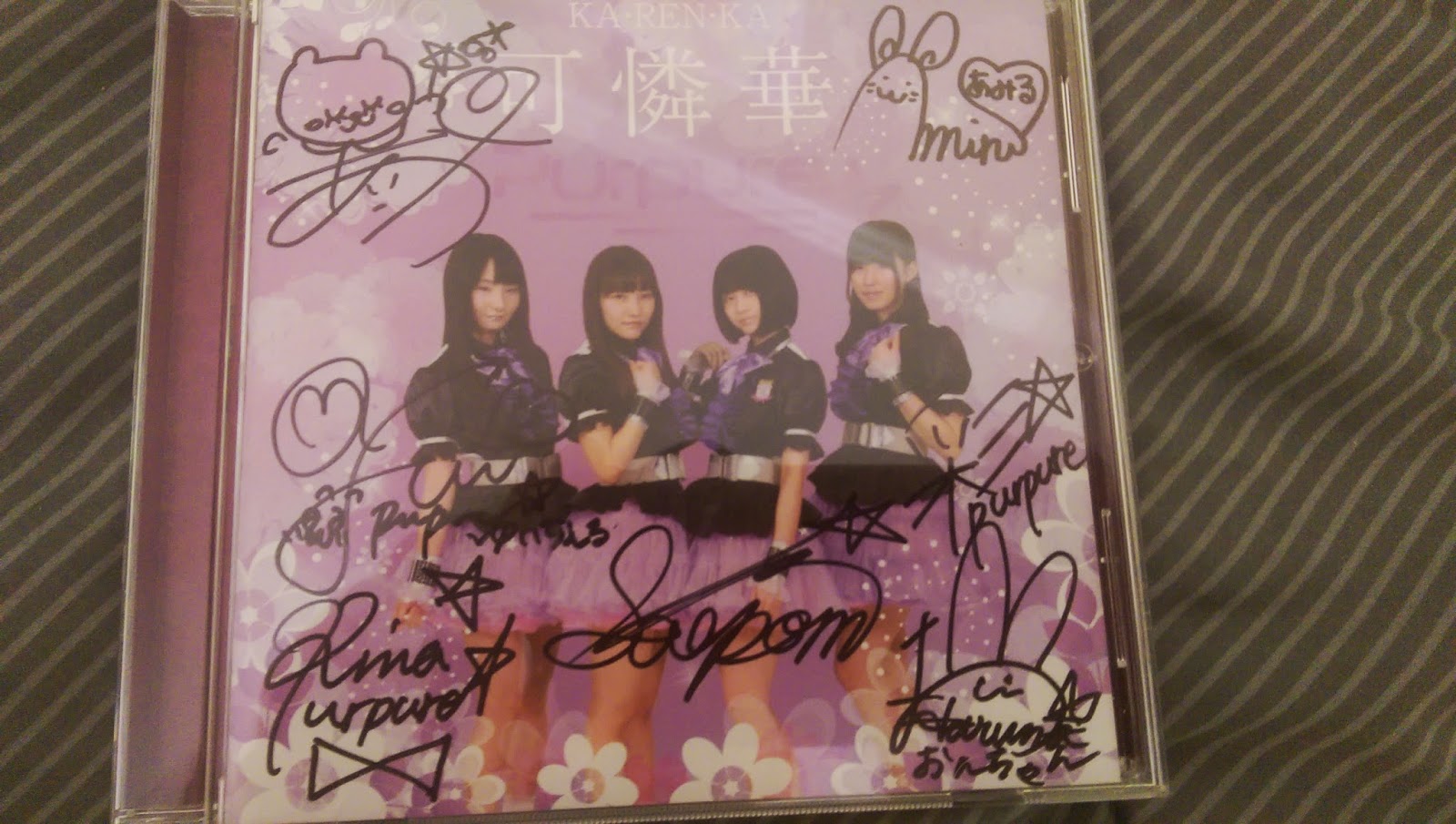 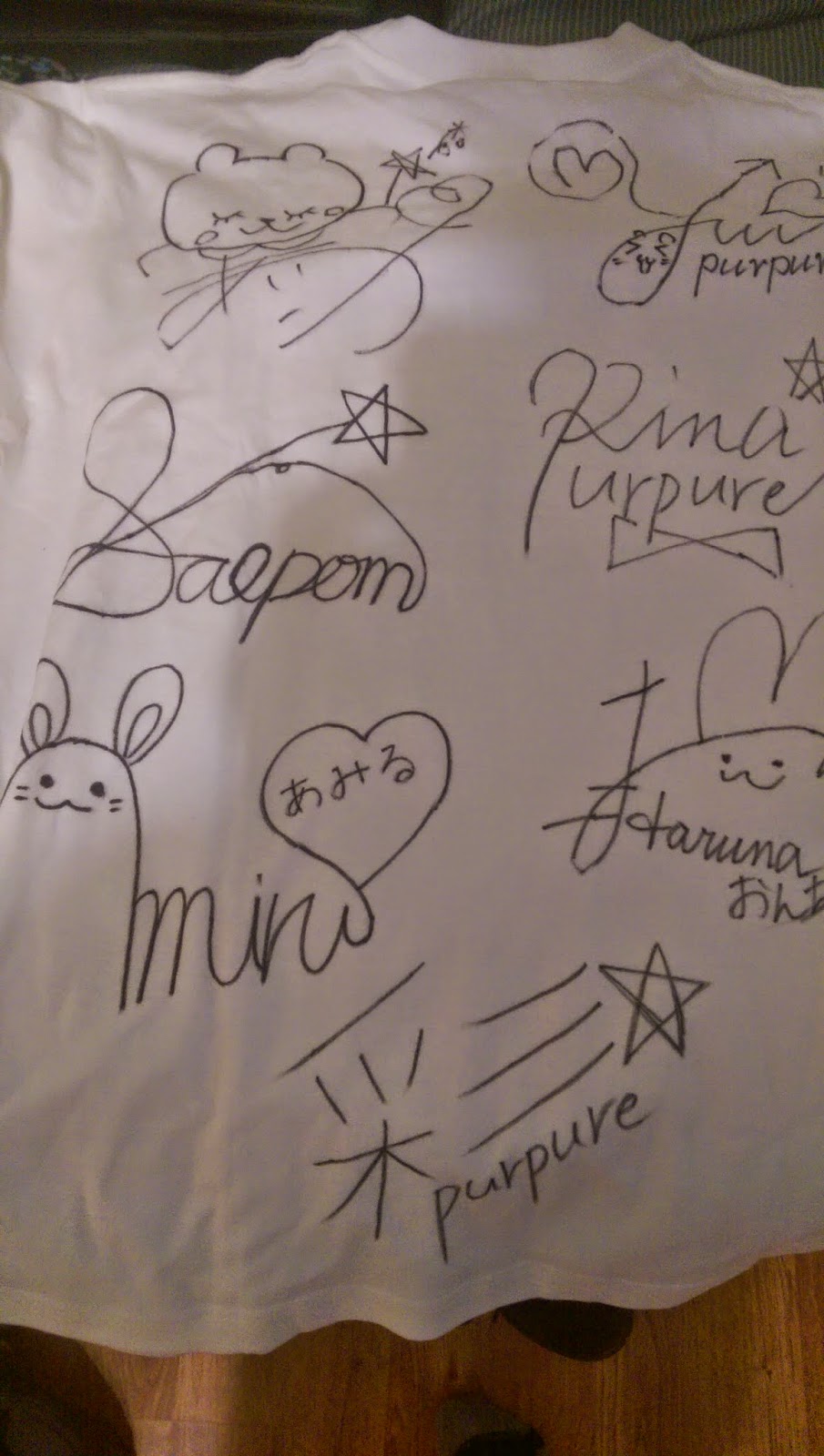 Again, may I say Thank You! I especially like the drawings you made for your autographs. They're Kawaii!

Share this group or this post to anyone you know. I hope for the success of the group for the future. I want to make this group known not only in the Kyoto area but around the world.