There are queens of all sorts over time. There are queens of different countries, different Western groups, and even queens in our own personal lives. These queens are of a different type, that you may not have heard (which is disappointing). These Kyueens have been in rule for three years over my idol kingdom.

Join me on learning more about the Kyueens of the New Age. Will you?

As I mentioned in the opening, Kyueens was started almost five years ago in December 2014.

They belong to the Universal Music Japan label and are associated with the agency, D Universe.

The group has released a total (as of 10/19) of 5 mini albums and 3 digital singles in their five year long campaign thus far.

The group currently consists of five members but some have come and go since their debut. The current roster of five have been together since 2016.

In this section I will introduce you to the members of the group and provide some tidbits of information as well. Kyueens is color coded, which makes it easier to figure each one out.

I will list the names and such from the members left to right....


As I mentioned they have released five mini albums and three digital singles. I looked for the cover art for their special single 2, and I could not find a photo. 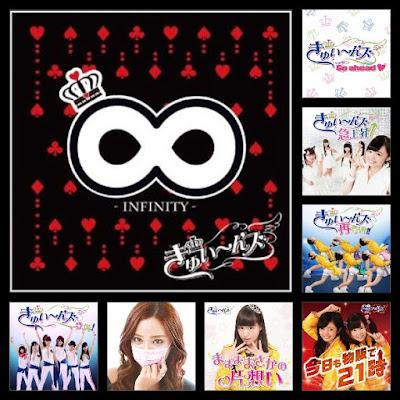 The albums are in order from bottom left going counter-clockwise

You can purchase some of these albums or stream them through various sites... If you live in a place other than Japan, your choices are slim pickings.... You can, through the now affiliated CDJapan purchase the albums I have linked above and get rewards points at CDJapan. You can stream a majority of them on Amazon Japan site and even stream their latest mini album Infinity on Spotify and Apple Music US....

This category is going to be hard because most of their music videos have been short versions but I will still showcase how far they have come in four years time.

The first music video is a lyric video from their first mini album Kyueens Toujou!!... The song is titled Shoki tto jiko shōkai!  or Self-Introduction! in English....

This video is a combination of live performances and spinning profiles of the original group. The song itself is actually quite good to be honest as the rock beat blends well with the vocals. The outfits are kind of strange to be honest but that is what made them special to begin with.

The next video is from their first digital single We Will!! Do Chokkyu!!... the video is of the same title.

This video is a different one as this will be the last you see of the original group besides Saiba Mizuki.... the song itself is a little too energetic for me and I listen to Dempagumi Inc.... I feel like they went for that vibe but it didn't really stick for me. The whole video itself is kind of strange, including the outfits but nevertheless it made them stand out.

The next video is from their third mini album Kyueen's Kyuujoushou↑ and the song title is Kyūjōshō janpu ￪ (Soaring Jump).

This video is one of my favorites as it is the first one with the current lineup.... Look how cute they all are. I mean, who can resist them!  The song itself is really good. The beat is good and it has a really good chorus to match. The outfits are really good and their charm shows throughout the whole video. I may be a bit biased toward the current lineup but I can't help it.

The last video I want to share is their newest one from their fifth mini album Infinity titled Sakamichi (Slope)...

This song and video are pretty great to be honest. Let's start with the song. It has a good rhythm and it stays strong throughout. Their vocals are really good in the song as well as they blend well with each other. The choreography is on point as well. Each member dances their heart out and it shows that they had worked on it a lot. The outfits match each member really well, especially the playing card ones. The uniforms are a nice touch to the school background. One more thing to add is that the members look really pretty in this music video as they have matured a little more.

You can follow the group through the following methods:

I came across the group through the Showroom-Live website in 2016. I saw that this group I hadn't heard of was streaming and I checked it out. The member was Yuri and I stayed and watched while also finding more out about this group. At first they didn't draw my attention but I couldn't get the group out of my head. I wondered who each member was and immediately liked them all without hesitation. After following them on Twitter, I knew I could not let them go.

You know the funny thing about Twitter is that you find people with similar interests and one of my long time followers is also a foreign fan of the group which makes me even happier to know that I am not the only one that is their fan from abroad. I hope to see them perform in December when I am there!

Kyueens is a group that needs more attention and love from not only domestic fans but international fans as well. They have so much talent that they could burst onto the scene and not look back and you would regret not paying attention to them. BET ON IT!

Before I close out this article, if the members read this, I want you to know that you are all amazing girls that have so much talent. You have a lot of heart and you put in your effort day in and day out. It may be tiring but please keep your head up and don't forget the people around you that care and have the utmost respect and love for you at home and abroad.

*As Always, no matter where you are, Have A Great Day!