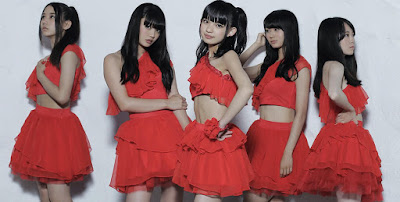 As the saying goes, "Sugar and Spice make everything nice." In the case of Dianna Sweet it is so true.
My crush level on this group is at a nine out of ten. So without further ado, let me introduce to you one of my favorite new idol groups.

Dianna Sweet was started in early 2013 under the label Sistermusic. The group is from Nagoya, which I have covered some other groups from that area. May I say that Sistermusic has a big star under them now.

The group performed at the @Jam Expo back in August, which I missed as that stage wasn't live-streamed and I was a little upset about it. The group will be performing at the Moshi Moshi Nippon Festival on September 28th alongside acts like Dempagumi Inc., Sakura Gakuin Graduate Ayami Muto, and multiple iDol Street groups as well as Cupitron. They also will be performing at the @Jam the Field Volume 6 on November 24th.

They are scheduled to hold their third one man live on September 5th, 2015 (Croissance) at Shibuya WWW. You can purchase tickets through this link: Third One Man Live Ticket Information

The group started with ten members as you can see in their first single music video First Love Revolution, which was released in November of 2013. I honestly do not know how the group got down to only seven members by the release of their second single Spider Love, which came out in March 2014. After the graduation of member, Omura Amika in May, the group now currently consists of only six members. The group members also are models away from music.

*Update (July 12th, 2015) - Since the original release of this article on September 16th, 2014, the group has lost two members, but gained one in the process. So, now the group sits at only five members.

This idol group is not color coded as you would think, but it is a nice change of pace after trying to find out certain idols colors.

The group members are:

How I Came Across Dianna Sweet

I came across this idol group by finding a group by the name of Niimo and seeing in the related videos section, the MV for the song Ice Cream Magic, which I clicked on, and man have I not regretted it since. I absolutely love this group and I hope to speak with the group someday if they come to the United States.

When I first debuted this article on the above mentioned date, I continued to listen to the group and showing other people their videos and they didn't seem to like them.

After a while, I researched other groups until I had time to update this page. Compared to the previous release, this one is 30 times better.


May I show you the first video they published on YouTube. The main track of the first single, First Love Revolution. They look so young in this video even though it has only been a little over a year.


The next video is of their main track for their second single, Spider Love. This is the first video I saw of them and drew my interest to the group.


From their third single, comes Ice Cream Magic. This video is top notch as well. I truly enjoyed the song as well.


Next up is their title track for their fourth single released back in January, Deep Snow. I love this song as well. The fan waving segments are my favorite parts of the MV.

This next one is for their new single, Fire Girl, which releases on July 29th. The Spanish vibe to this song makes it a great jam to listen to. Also, the set they used, which happens to be a Mediterranean village set-up makes the video. The choreography is pretty legit to and that random rap part, makes it a lot more fun.

Please wherever you are or whatever time it is always remember to live life to its fullest and have a great day!
Dianna Sweet