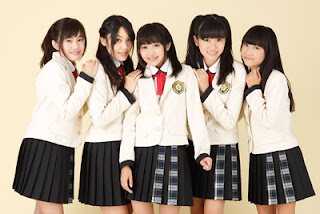 The groups name is Karat☆ or からっと☆ and it was started in 2012 as the ambassador for the Japanese Karaage Association, which is dedicated to fried chicken. Weird, huh?

The group is not under a label or agency which was a shock for me but is good for them as they can be independent artists and get all the royalties.

The group consisted of only three members until December 2013 when Ariel left to focus on her studies. Within the month, the group added two new members thus bringing the total to four. In July 2014, Yui graduated from the group to the dismay of staff and fans to focus on studies.

*Update (July 12th, 2015) - While I was working on other projects, I let this group slip through my fingertips and I lost track of them since I first published this article in October 2014. Since that time, the group has added two new members.

Name: Alice (Original Member)
Birthdate: May 27th, 1998
Fact: Her hobby is to sleep, play volleyball and to read whodunits

After Yuis' Graduation and with current member roster:

This video was for their debut single. The song is called Fried Guys.

I could not find a music video for their second single but there are two for their third. The first one is called Light.


This is the second one and it is called Kara Koro Shuppon.

All of the three videos above were with the original members. This video is from their fourth single and is produced after the graduation of Ariel with all four members. The song is titled Dot Aozora.

Here is the latest MV they have released. Ima wo Ikaru.


How I Came Across Karat☆

I came across this group by accident by roaming YouTube, as usual, and saw their video for Dot Aozora. I can't tell you how nice it was to see four young girls at that time having the time of their life singing and dancing to a catchy rock tune. I thought to myself who are these girls and where can I listen to them more. After about a couple of weeks, I put them on the backburner, I'm so sorry. I just couldn't find information on them and it became frustrating. After days of research I found them on a site bringing forth the information I needed. Thank You jpop-idols.com! So, all in all, I have had fun listening to them and plan on listening to them in the future!

You can follow me on Twitter. Believe me, I don't mind. Feel free to leave comments as well!


Please Wherever You Are Or Whatever You Do, Enjoy Life To Its Fullest And Have A Fantastic Day!