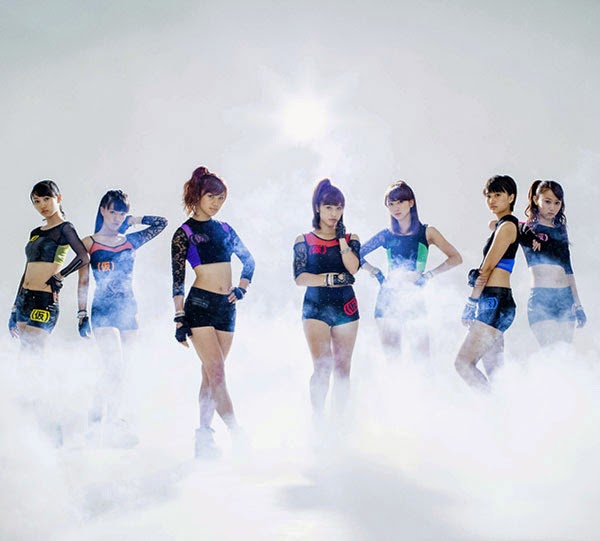 Today, I would love to introduce you to one of my favorite idol groups and that group would be the Up Up Girls Kakko Kari (アップアップガールズ（仮）.

The UUG were formed in 2011 by Up-Front Agency under the name Up-Front Girls.

The group is also known as UFZS, as a group that makes K-POP dance covers.

The unit held its first live in September 2012 in Daikanyama Unit in Tokyo.

In December 2012, T-Pallete Records signed them and they changed their name to the Up Up Girls Kakko Kari. If you don't know what Kakko Kari stands for, the definition of the term means "subject to change." So technically their name could change at any time (just like a popular item for sale at a local store).

They were moderately quiet in 2013, but last year, they stepped up hardcore.

In February 2014, the members teamed up with solo artist Kikkawa You and The Possible, to form the group titled Team Makenki.

Between the months of March and June 2014, the UUG held their first nationwide live tour. During that same time, they held concerts with the group Tokyo Girls' Style.

They also visited Hong Kong in June 2014 at the Kawaii Pop Festival.

This one is so amazing to even write in here, but in August, they climbed Mt. Fuji throughout the day and night to perform their song, "Zenryoku! Pump Up!!". The video of that is so amazing and I will place that in the video section of the article.

In December, the group joined forces with the Japanese Self Defense Force to challenge themselves in the military at Utsunomiya Garrison.

It has been decided that on May 31st, 2015, the group will participate in the Honolulu Ekiden and Music Festival. They will also run the team relay event, which is a total of 42.2 kilometers. I want to go so bad to that.

The group currently consists of seven members and each has been assigned a color. Make sure to look for interesting facts about some of the members.

Name: Sengoku Minami
Birthdate: April 30th, 1991
Color: Red
Fact: She is the leader of the group. Ms. Minami has also starred in a horror movie in July 2013 with a fellow member and others from different idol groups. Winner of Next Gravure Queen Battle in January 2014. She also held a solo live performance in April of 2014. She has also won the Sakidol Ace Survival Season 2. If I had one member to oshi over, it would be her. Not only is she talented but also she is very pretty and her birthday is only four days from my own, so yeah.

Name: Sekine Azusa
Birthdate: June 14th, 1996
Color: Orange
Fact: According to her official profile, she likes to read aloud and talk to dogs in their eyes (Ehhh???)

As a group, they have released 19 hard copy singles and two digital singles. As Team Makenki, they have only released one single. The group has also released two albums.

To see all their singles check out here.

Sorry, since they have had a lot of singles, I decided not to type every one of them out. It would have taken a lot of time to accomplish. Again, I'm sorry.

For the first review, I would like to show you the video I saw that caught my attention. It is their song titled Zenryoku! Pump Up!!


My review of the video is that it is so energetic, you feel like you could dance to it all the time. This song really helps when you're out of energy because just like the song suggests, Full Power! Pump Up!! The video is pretty fun to watch as well because it showcases the members dance talents as well as singing. Top Not Song!!!!

The next video is for their song Enjoy!! Enjoy!!


The group filmed this while in Taipei and it is so amazing to watch. The sights of them walking around enjoying themselves and the view near the water cap off a high energy song in which the chorus will stick in your head.

For ballad wise, I will drop you the one and only ballad I seem to enjoy. It is for their song This Melody With You.


My review of this song and music video goes as follows. The song is simply amazing. The lyrics are so amazing, that you wish that you could jump through your laptop and sing the melody with them. The music video is perfect as well as it showcases their beauty. The dance moves are pretty basic but that is alright by my own standards.

Like I stated earlier they climber Mt. Fuji and performed Pump Up! on top and here is that video. It looks so amazing.


To see all their music videos, check out their YouTube playlist here.

How Did I Come Across UUG?

So back in June of 2014, I went searching for new idol groups to listen to and at that time I saw in my suggested videos, the video for Pump Up! At first I was like,"It's not bad, I kind of like it," but slowly and surely the song was stuck in my head and it wouldn't get out. I showed most of my co-workers the video and they weren't very enthusiastic about it as I was. I watched their other music videos and fell in love with the group. I became a big fan of the group that I purchased a t-shirt from the group and I love to wear it. It shrank though :(
I was able to find most of their songs through a app on my phone and I just jammed out to them nonstop. Even when shooting hoops in my spare time, they would be blasting through my headphones at that time.
But I kind of got tired of them back in October to the point, I took them out of my playlist but a couple of weeks ago, I remembered randomly one of their songs and thought to myself, "I miss them", and they were put back in a instant.

Some song recommendations if you find them are: Be Your Soul, Going my ↑, DJ PandaBoy Remix, and also Upper Rock, and バレバレ I Love You.

I highly suggest you keep track of this group in the future as they will be a threat (good one, not bad) to not mess with. I predict a big year for the group and maybe a new album and a couple of singles.

*And as always: Please Wherever You Are Or Whatever You Do, Enjoy Life To Its Fullest And Have A Fantastic Day!
Up Up Girls Kakko Kari アップアップガールズ（仮）